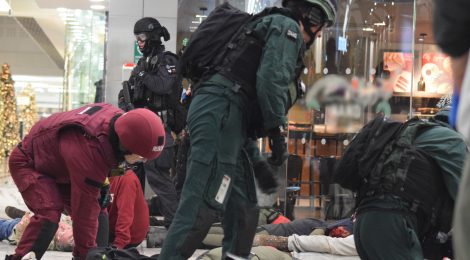 A three-day, live-play exercise to test the response of police, military and other partners to a terrorist attack took place in London between 28 – 30 November 2016.

More than 500 staff and officers from a variety of agencies took part in Exercise Treblerope which was five months in the planning.

Day one saw first responders from the emergency services put through their paces as they responded to a staged marauding terrorist firearms attack at a mall on the Canary Wharf Estate, between 23:00hrs and 05:00hrs. Their job was to detain the suspects, manage the scene, protect the public and rescue the wounded.

On the second day, specialist counter terrorism officers tested their ability to track down outstanding suspects. A covert phase of the exercise which took place at The Royal Mint in Tower Hamlets and a disused site at St George’s Hospital in Hornchurch between 11:00hrs to 22:00hrs.

On day three, officers were tested on their ability to resolve a siege scenario, which was played out at the Metropolitan Police training centre at Hendon between 12:00hrs and 00:00hrs.

When the exercise was over the Met tweeted:

A multi-agency exercise which took place over three days to test the response to a terrorist attack has concluded https://t.co/3eG8vJUp1Q

Exercise Treblerope was part of the series of exercises held regularly, across the country, under the Government’s rolling programme of national counter terrorism exercises. It was not in response to any specific threat or intelligence regarding the locations it took place in.

“Exercises like this are a really important way to ensure that our multi-agency plans to respond to a terrorist attack are as good as they can be.

“During live play we test our tactical response to terrorists with firearms and how we work together in practice.

The exercise was focused on the extreme end of scenarios, following attacks elsewhere in the world, but I’d like to stress it was not carried out in response to any specific intelligence.

“The public may have seen extra police and military personnel in some areas and may have heard some noise from firearms being used during the course of the exercise at the Canary Wharf Estate and Hendon but there was absolutely no risk to the public.

“Every effort was made to minimise disruption and I thank the public for their patience. I am also extremely grateful for all the support we received from our partners, those whose premises we used to carry out the exercise, and the many businesses in the surrounding areas.

“I am really happy with how the exercise went – I witnessed first-hand the professional response of our emergency services. Our next step is to carry out a debrief with our partners to ensure that we capture any learning from the exercise and incorporate this into our tactical plans.”