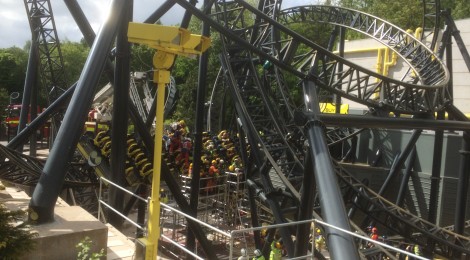 Firefighters and HART paramedics conducted multiple rescues from height, with oxygen and pain relief given to patients in the stricken carriage before they were immobilised and moved to the ground.

In total 16 patients were treated, some with serious leg injuries including one that required subsequent amputation.

The Health and Safety Executive are now investigating the incident.  Alton Towers was closed to the public in the days after the incident.

There were some reports the initial 999 call was delayed by up to eleven minutes although Alton Towers owner Merlin Entertainment was widely praised for their actions and communication after the first response.