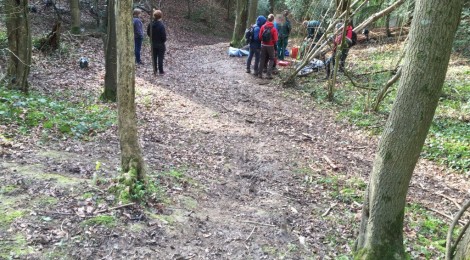 A mountain bike rider had to be rescued with help from specialist paramedics after he collided with a tree on a steep muddy slope in.

The ambulance service received a 999 call at 12.15pm on Tuesday afternoon after a teenage boy had collided with a tree whilst riding in a wooded area near to Ledbury Police Station on the Worcester Road. An ambulance and a community paramedic were sent and were later supported by the Trust’s Hazardous Area Response Team (HART).

A West Midlands Ambulance Service spokeswoman said: “The ambulance crew were flagged down by the teenagers’ friend before being guided up a steep muddy slope to the boy’s location, about 200 yards away from the road.

“The 13-year-old, who had reportedly been knocked unconscious initially, had suffered a cut and bruising to his face as well as pelvic pain.

“The ambulance staff administered pain relief to help ease the teenager’s discomfort before they carefully immobilised his pelvis to prevent further movement.

Once HART were on scene, the teenager was placed in a specialised MIBS (multi integrated body-splint) stretcher which is made of tough fabric and has carry handles for easy use.

“The HART team then used rope rescue techniques to carefully carry the boy down the muddy bank to the awaiting ambulance. Once on board, he was taken to Hereford County for further assessment and treatment.”