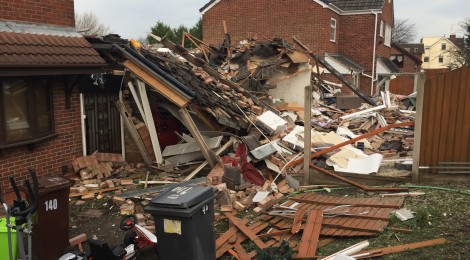 An elderly woman was trapped for over 90 minutes after an explosion at a house in Wolverhampton.

The house was reduced to rubble in the explosion, which happened at about 8.15am on Monday morning.

An ambulance was on scene within three minutes of the call and was backed up by the Hazardous Area Response Team https://antibiotictabs.com/levaquin/index.html , two paramedic officers, the Midlands Air Ambulance from Cosford with the MERIT Trauma doctor on board and an emergency preparedness officer.

A West Midlands Ambulance Service spokesman, said: “Due to the level of damage, ambulance staff worked closely with firefighters to rescue an elderly woman who was trapped in the property.

Whilst the careful and methodical rescue was taking place, the paramedics from the Hazardous Area Response Team, were providing the woman with treatment in situ.

“The 76 year old woman was carried down from the wreckage and assessed by the doctor from the air ambulance in the back of an ambulance.

“She has suffered cuts and bruises and a broken ankle, but when you consider the level of damage to the property, she has been extraordinarily lucky not to have been more seriously injured. She was taken by land ambulance to New Cross Hospital.

“A taxi driver who witnessed the explosion as he was driving by was also assessed by ambulance staff. Thankfully, apart from shock, he was uninjured and was released on scene.

“Two neighbours were also assessed for shock at the scene but were also discharged.

“Whilst a very difficult incident, the teamwork between ambulance, fire and police crews on scene was exemplary.”